Let’s face the facts: Many Los Angeles neighborhoods have a lot to offer...and West Hollywood is definitely a prime example of one of these. Think about it. The infamous Sunset Strip zips through the area, pulling in people from across the world. The LGBTQ community has long had its strong-hold in the area, bringing new charm and a different influence. Iconic hotels, like the Chateau Marmont Hotel, rise above the palm trees as a symbol of luxury. If these aren’t appealing enough, West Hollywood is often lauded as California’s most walk-able city, with a walking score of 89. If you live in a West Hollywood single-family residence, you might be thinking about selling your home and downsizing into a nearby condo. Not only...

Meet the Latest and Greatest Affordable Housing Option in NELA

Something very cool and very inspired is happening in Los Angeles real estate right now. And I, for one, think its time has come. I'm talking about small footprint, eco-friendly, affordable housing geared towards first-time home buyers. One of the most exciting developments is happening at NELA Union in Glassell Park. It's on Verdugo Road right off the 2 freeway, in a neighborhood that is set to become the next thing, ala Highland Park. Unlike SL70, which I wrote about here, NELA Union is a collection of town...

You've likely driven by this property and simply thought it was an example of cool Silver Lake mid-century modern architecture.

That it is, but the Avenel Cooperative Housing Project has an interesting history. After WWII the Federal Housing Administration provided funding for houses, most of which were single family homes.  During this period, when home building was in full swing, a group of 10 families pooled their resources (about $11,000 each), bought ½ acre of land and set Gregory Ain to the task of building a cooperatively owned multi-family complex.

These families were looking for affordable housing...

Posted by Jenny Durling on Saturday, July 7, 2012 at 5:46:54 PM By Jenny Durling / July 7, 2012 1 Comment
36 On Echo – New Construction in Echo Park There are Echo Park buyers who want a little old California bungalow to call home, but lately I’ve been getting requests for new construction. 36 on Echo is the latest new construction in Echo Park and the first phase is nearing completion. Warning - if you are interested in these, do NOT go without an agent. The sales office staff represents only the seller. No buyer's agent in-tow, No representation for YOU! I recently wrote about Live Work Lofts in Silver Lake and those two complexes are relatively new. 36 on Echo is SO new that none of the units are actually completed yet! I did take some time to visit the model unit and see what the finished product will look like. D.R. Horton is the builder of these 36 new townhomes coming to Echo Park. They describe the architectural style as Contemporary Craftsman. I’m not sure if I would call it that...
View Full Post

Posted by Jenny Durling on Thursday, July 5, 2012 at 12:25:02 AM By Jenny Durling / July 5, 2012 Comment
There are several condominium complexes in the area but only a couple of live work lofts in Silver Lake.  If you are truly looking to run a business out of your home, check out one of these two complexes.

The Sunset Silver Lake Lofts complex at 4111 Sunset Blvd. was built in 2007 and sits right in Silver Lake’s Sunset Junction with it’s coffee houses, boutique shops and restaurants. How nice to be able to cross the street for a cup of coffee at Inteligencia or to grab some wine and cheese at The Cheese Store of Silver Lake.  The complex was developed by KOR and consists of 43 units in four freestanding buildings. All of the units have high ceilings and walls...
View Full Post

Posted by Jenny Durling on Sunday, May 20, 2012 at 8:55:42 PM By Jenny Durling / May 20, 2012 Comment
If you have been looking for an opportunity to live in Sunset Junction, now could be your chance. There are three units currently available in the Sunset Silver Lake Loft Complex at 4111 Sunset Blvd.  Though the floor plans are similar, each unit has its own character and finishes. 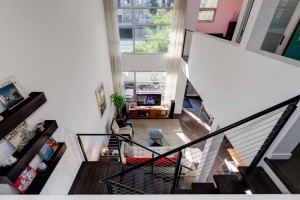 Unit #111 is a 2 bedroom, 2 bath unit facing Sunset Blvd.  There is a small private patio space and direct access to Sunset, a hop, skip and a jump away from Intelligencia and the ...
View Full Post If you’re looking for additional space, unit #348 might be more your speed. This unit has 2 bedrooms and...

Posted by Jenny Durling on Wednesday, February 2, 2011 at 6:34:22 PM By Jenny Durling / February 2, 2011 Comment
If you are in the market for a Silver Lake condo- there are several newly listed units There are a number of newly listed Silver Lake condos open this week that I was able to preview.  The five condos I saw were in various parts of Silver Lake, all 2 bedrooms and range in size from 1,202 to 1,692 square feet and priced from a low of $349,000 to a high of $769,000. The best deal by far is unit 202 at 2929 Waverly Drive.  This is a great sun-filled  2 bedroom, 2 bath unit situated in one of the best areas of Silver Lake.   It’s within walking distance to Edendale Grill, Trader Joes, and a multitude of Silver...
View Full Post

Posted by Jenny Durling on Tuesday, October 13, 2009 at 6:31:56 PM By Jenny Durling / October 13, 2009 Comment
You'd love to buy a home in Silver Lake CA but what can you get in the $500,000. range that's more than 1,000 square feet, has 3 bedrooms and to top it off, is actually in Silver Lake's coveted Ivanhoe School District?  If you said "nothing", you're right that you're not going to find a house that fits that description but what about buying a Silver Lake condo?  If you've never considered it, this could be the perfect time. Condominium living offers all the benefits of home ownership, without the hassles of yard care or exterior maintenance....
View Full Post

Posted by Jenny Durling on Saturday, July 25, 2009 at 6:50:40 AM By Jenny Durling / July 25, 2009 Comment
Units in some of these buildings were selling in excess of $600K just a year ago. If you have been thinking of buying a condo in Silver Lake near the Silver Lake Reservoir or near Sunset Junction or within walking distance to Silver Lake Farmer's Market and Trader Joe's, this could be a great time to buy! How about a 2-bedroom unit in the contemporary style complex at the corner of Silver Lake Blvd and Glendale Blvd right across the street from Silver Lake's soon-to-be-open new library?  This property is just a hop skip and a jump away from the Silver Lake Reservoir Walking Path. It's also close to shopping and restaurants and part of the Ivanhoe Elementary School District.