Posted by Jenny Durling on Wednesday, October 28, 2009 at 8:24:44 PM By Jenny Durling / October 28, 2009 Comment
I honestly can't believe this house is still on the market. When it was first open some 70 days ago, I expected it to be sold in no time flat. It was my hands down  favorite  new listing at the time. Apparently, I wasn't actually wrong that it would sell quickly. Seven days after this beauty at 4349 Cedarhurst Circle in Los Feliz  went on the market, the status was changed to pending. I don't know why this property fell from grace but it was back on the market as of November 11 and still it sits. 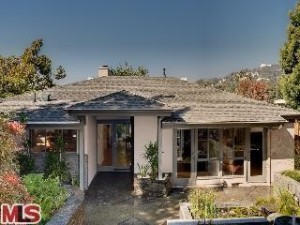 Behind a private gate on a small street in the Franklin Hills lies this oasis from the city. The walk down the path past the pond and fountain in the...
View Full Post

This over sized 1920's Tudor is in a prime location and boasts almost 3200 sq feet of living space on a  6700+ sf useable lot.  This property is not a fixer by any stretch of the imagination. There is a bonus room plus bath, dining, kitchen and living room upstairs with 3 bedrooms and two baths downstairs. Don't forget the attached garage and views of...
View Full Post

Posted by Jenny Durling on Tuesday, October 13, 2009 at 6:31:56 PM By Jenny Durling / October 13, 2009 Comment
You'd love to buy a home in Silver Lake CA but what can you get in the $500,000. range that's more than 1,000 square feet, has 3 bedrooms and to top it off, is actually in Silver Lake's coveted Ivanhoe School District?  If you said "nothing", you're right that you're not going to find a house that fits that description but what about buying a Silver Lake condo?  If you've never considered it, this could be the perfect time. Condominium living offers all the benefits of home ownership, without the hassles of yard care or exterior...
View Full Post

Posted by Jenny Durling on Friday, October 9, 2009 at 6:26:49 PM By Jenny Durling / October 9, 2009 Comment
4042 Farmouth Dr. in Los Feliz is a prime example of a cool Mid-century California Ranch house that practically erases the lines between indoor and outdoor living. The large living room has walls of glass that open to a great outdoor entertaining area with sweeping views from the Observatory and the rolling hills from Griffith Park to the San Gabriel Mountains.  It actually took my breath away when I walked into the living room with it's high ceiling and fabulous views that seem to go on forever.

Posted by Jenny Durling on Monday, October 5, 2009 at 5:55:51 PM By Jenny Durling / October 5, 2009 Comment
Low priced Los Feliz real estate is selling relatively quickly, however there is a relatively large inventory homes for sale in the area right now. The mls show the current active listing inventory in the 90027 zip code to be 67 homes. The follow chart shows Los Feliz Real Estate Market activity for the Month of September, 2009.

I've talked about this before.  Why buy a house when you can buy income property and have a tenant help you pay your mortgage? That post was about properties for sale in Silver Lake, but the same information holds true for whatever area you are looking to buy. This property is located at 2158 VESTAL AVE and consists of  a 2 bedroom/1 bath unit plus a 1 bedroom/1 bath...
View Full Post
LOS ANGELES NEIGHBORHOODS
Search Homes
Buyers
Sellers
Blog Archives